Your Baby Can Read: Should I Get It For My Baby? 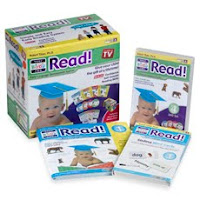 Many people have seen the late night infomercials for the popular baby reading program Your Baby Can Read. Some have tried it while others are skeptical that spending $200 on a set of books, DVDs and flash cards can actually teach their baby or toddler anything. Well, I've purchased it and can tell you first hand that I love the program and would recommend it to any mom or dad out there.
What is it?
Dr. Titzer is the creator of the program and he touts it as one that teaches babies as young as 3 months to read. The program consists of 5 DVDs, 5 Lift a Flap books, 5 sets sliding word cards, 82 double sided word cards, 50 word game cards and a parent's guide. For those that aren't familiar with the program, Your Baby Can is an early reading program marketed for kids 6 months to 5 years old. Since the natural window of opportunity to learn written language is the same as that to speak, using Your Baby Can Read from birth to 3 years old is the ideal time to use the program. Since a baby's brain thrives on stimulation and develops at such a fast pace, the best and easiest time to learn language is during the infant toddler years. This program helps you enhance your child's learning ability though sight, sound and repetition.
When To Use It?
While the creator of the program suggests that babies 3 months old and up can watch it, my daughter wasn't quite ready yet at 3 months. She didn't have the attention span to sit there for the duration of the 20 minute or so starter video. I'd put it on while I was changing her, while we cleaned up her room or put away laundry and she'd watch it in 5 minute increments. By the time she was about 9 months, she became more interested in the videos and started learning from it rapidly. Almost immediately she was able to point out body parts such as her eyes, nose, mouth, toes and hands. She wasn't necessarily able to read the words yet but she recognized what the body parts were when I said them. That was enough for me, especially at 9 months.
The videos also incorporate animals and actions. Some may feel that this may confuse children. As a former teacher, I sure did. I wasn't sure why they would throw in the words gorilla and hippopotamus with toes, mouth and nose. I soon figured out that it's so that children can associate body parts with animals and people. She was soon able to point out the eyes, mouth, ears, nose and legs of an animal, as with people and her dolls.
After about 1 year old, she began to pick up the actions such as kicking, stomping, putting arms up and putting arms down. She wasn't able to read all of the words yet but, again, she was able to do all of the actions when I said them. She was, however, able to read the short words such as yes, no and nose. In order to really benefit from the program and actually be able to read the words, parents should use the books, flash cards and picture slide cards together with the DVDs. For me, working full time, I just get little time to do that so I used mostly the DVDs. I used the books, flash cards and picture cards and still do but not as much as I should.
Now, at a little over 18 months old, we've gotten to the 3rd DVD and she's picking it up much faster. She's recognizing more of the words in text and speaking more as well. She also loves the songs and dances like crazy, acting them out, each time they play. I think that as time goes by, she'll pick up more and more and be able to read. Even though not all kids may be able to read as "babies", I truly do believe that the program teaches toddlers how to read, it just needs to be used religiously and all of the components need to be used jointly. The program definitely teaches word recognition and teaches toddlers how to read much earlier than they'd learn it without the program.
So, Should I Get It?
So, if you're debating on spending the money on the program, I'd say it's a great investment. Studies prove that the earlier a child learns to read, the better they perform in school and later in life. Early readers have more self-esteem and are more likely to stay in school. Meanwhile, a national panel of reading specialists and educators determined that most of the nation's reading problems could be eliminated if children began reading earlier. All of this is worth the $200 price tag.
Posted by FitFluentialMom at 1:58 PM