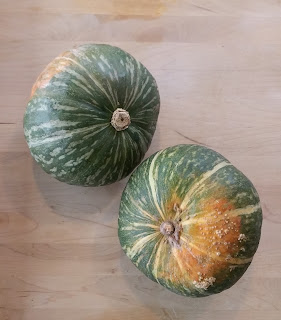 So, have you heard of a kabocha squash because I hadn't until my husband brought it home this week thinking it was an acorn squash LOL! I saw it and immediately knew it wasn't one BUT I was kinda happy because I've never met a squash I don't like (like my friend Andrea says) and I was pretty psyched to try making this one!

I read up on Kabocha on a fave blog of mine called Nutritious Eats and learned a lot about Kabocha before making it!  If you are new to Kabocha, it’s similar to pumpkin or  acorn squash, but even better because it’s even sweeter and has the perfect fluffy interior.  Plus it's a nutritional GEM!  This anti-inflammatory food is bursting with nutrition. It’s full of beta carotene, iron, vitamins A, C, fiber and some B vitamins. And it’s got 40 calories per cup AND less than half the carbs of most other squash (about 7 grams per cup). Seriously a super food so, needless to say, after making this recipe and trying it, I scurried off to the store and bought some more today!
So this basic cooking technique can be applied to any large squash really. Here we go.
One of the trickiest parts about large squash is cutting them. Honestly I am in fear at times that I am going to take that large knife and jam it straight into my body because most squash is hard to cut! Like really hard! I had to get pretty forceful with this one and that is why I typically roast mine in larger wedges versus trying to cut it into thin stripes. I mean, I’d really like to keep all my fingers! 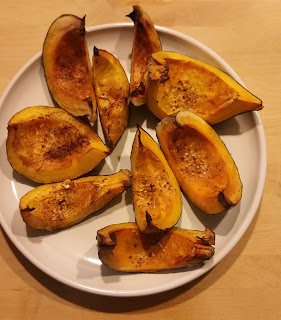 Just like any other squash you can add chopped kabocha to stews or puree into soups, baked goods or breakfast items like pancakes! I love it just like this though!

Here is a video link on making it and below is the recipe! Don't mind the crying kiddos in the background, that's life! LOL

Ingredients
Posted by FitFluentialMom at 7:28 AM